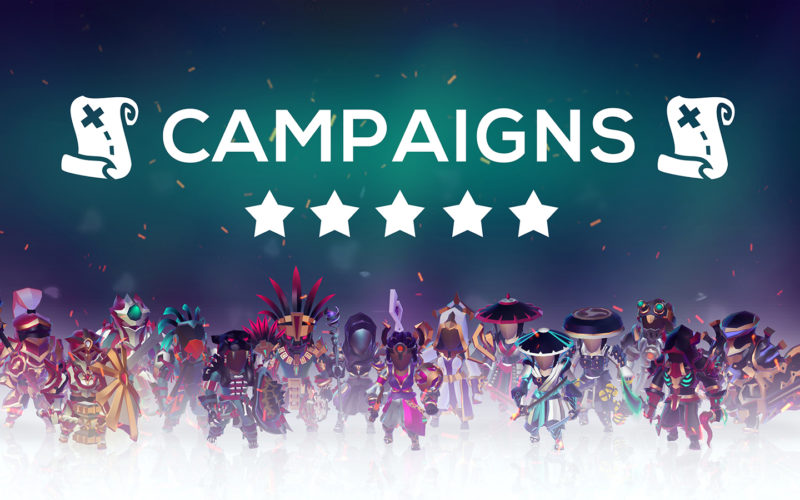 We knew from the very beginning and after MONOLISK’s release it was immediately clear what our next midterm priority should be. You players wanted longer stories and more complex experiences to participate in. Mostly you asked for a story campaign made by Trickster Arts.

We decided, though, to stay true to the original concept where players are the ones who build their own maps and write stories for others and we are here to give you tools you need to do that. Therefore we implemented full support for you to build your own campaigns from Shards you already created.

You can simply chain your Shards in campaigns, share them online and of course play other players’ campaigns. Each campaign shows difficulty of it’s hardest Shard and more importantly average time it takes to finish it’s whole story. Do you have five minutes, fifteen, an hour? You can chose whatever length suits you best and of course you can continue unfinished campaign later.

Finishing a campaign gives extra 20% Orbs and Glory and may give up to 5 extra Stars to it’s author.

Best for me, New and Top sections are all there in campaigns’ menu to deliver the best content we can find for you at any given moment. It just may need some time and enough campaigns created in the database to chose from especially in best for me section.

Each campaign can be introduced with short intro text giving you an opportunity to hook players for your campaign and let them dive straight in your story allowing you to save ingame signs for further storytelling.

We are honestly looking forward to see and play what you will build with this new tool!

The game’s visual is still in motion and we are consistently improving how the game looks adding details and polishing what’s already there.

The most obvious is our update of death effects and explosions. We added some detail to the moment of death or explosion and most creatures leave a splash on ground when they die. Explosions of course leave a mark too. Killing spiders have never been so satisfying 🙂

In addition to that we added dying on-screen effect, when you character is low on health.

Shard name label received nice new animation and background. Any time you visit a new shard should be more pleasing.

All progress bars got an extra detail.

Ability effects like Whirlwind and Big swing were visually improved too and we will continue on polishing others in following updates.

While working on our content update (more below) we are continuously looking for small improvements and interactions we can add to already existing Realms. This update brings new door for Zikkurat and Pyramid, a chandelier for Cathedral and a cage object for Prison.

In paralel to this campaign update we have been working on entirely new content. At the momet we have 5 new realms, 10 new creatures and new items and abilities in progress. It will take us some more time to finish the whole package, but we will start announcing it’s new content soon.